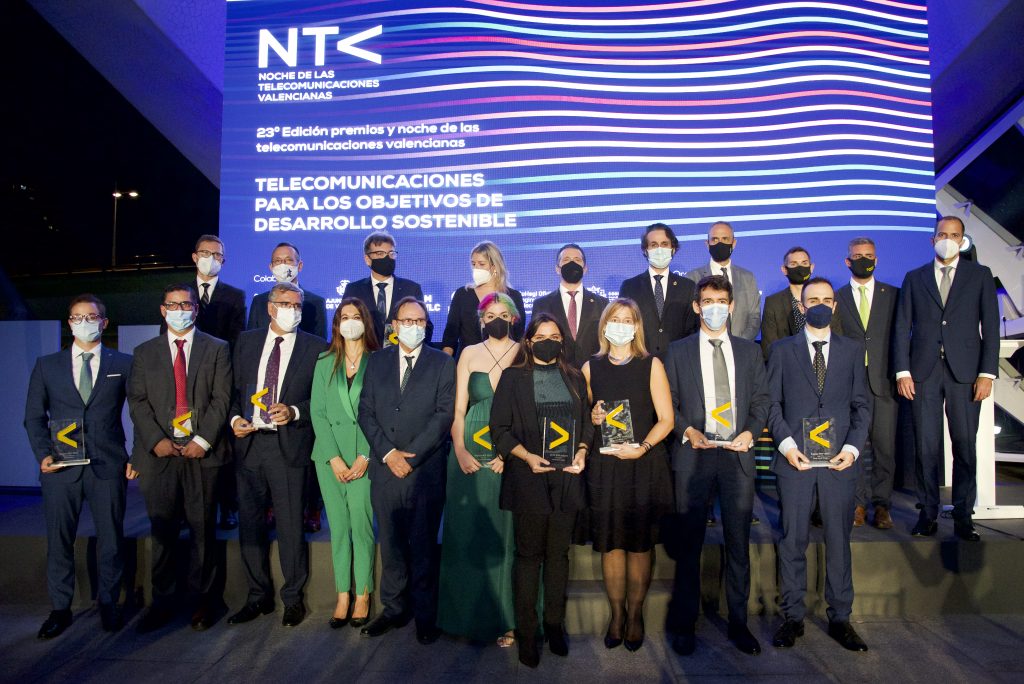 Successful participation in the Valencian Telecommunications Night, in partnership with Feria Valencia

After last year’s virtual event, this year once again saw people attend in person. The event began in the morning in the Blue Cube at the UPV’s Polytechnic City of Innovation. Throughout the morning, the sponsor and partner companies of #NTV2021 met with attendees at their stands in a space set aside for networking and professional exchange. Presentations began at 10 a.m. These could be followed via streaming. Sergio Riolobos, Dean of the COITCV, was in charge of welcoming all the attendees. This was followed by a roundtable discussion and the presentation of the book “The New Challenges for Healthcare after the Pandemic”, moderated by Vicente Traver (Director of the UPV Mysphera Chair). Participants included Cristina Bescos (Director of EIT-Health Spain), Jaime del Barrio (President of the Digital Health Association), Jesús María Fernández (deputy for Navarre in the 11th and 12th legislatures of the Congress of Deputies), Juan Antonio Hueto (Coordinator of surgical processes at the Catalan Health Institute), María Teresa Arredondo (lecturer at the Polytechnic University of Madrid) and Vicente Gisbert (Director of eHealth at Telefónica). They spoke about health technology projects developed in the wake of the pandemic, and listed the challenges facing the sector and how ICT has become fundamental to achieving them.

The session continued with the next roundtable, entitled “Telecommunications and SDGs for a More Sustainable Future”. Moderated by journalist Luis Zurano, the participants were José Manuel Plaza (Telefónica), Daniel Morales (Orange), Artur Gradolí (HPE), Julio Espiña (Minsait) and Fernando Jaime (Huawei). During the symposium, the need to promote access to communication structures was discussed, as well as the role of telecommunications in accelerating the SDGs and the desirability of embracing sustainability in digital transformation processes. After the roundtable, the director of the ETSIT-UPV, Héctor Esteban, reviewed some of the future challenges for the ICT sector and closed the session’s presentations.

#NTV2021 continued in the evening, this time at the Hemisfèric in the Ciutat de les Arts i les Ciències de València. After a welcome cocktail, the 23rd Awards Ceremony began at 9 p.m., which could also be followed via streaming. The Regional Minister for Innovation, Universities, Science and Digital Society, Carolina Pascual, opened the event. Pascual highlighted the role of digitalisation in facing the challenges of the future, and how telecommunications will always be linked to this. Sergi Campillo, Deputy Mayor of Valencia City Council, also spoke, and said that the Gala “is a sign that we are united to demonstrate the Valencian capacity for technological innovation”. After these speeches, the #NTV2021 Awards were presented, which were as follows:

The Generalitat Valenciana Regional Minister for Finance and Economic Modelling, Vicent Soler, accepted the DGTIC award and highlighted the involvement of the Regional Ministry standing shoulder-to-shoulder with telecommunications to continue advancing.

After the awards ceremony, Sergio Riolobos, Dean of the COITCV, spoke, stating that telecommunications “have become the great backbone of society”. He also thanked all the organisations and companies that made #NTV2021 possible once again this year for their support. The event was closed by the rector of the UPV, José E. Capilla, who stated that universities “Can articulate a business fabric as powerful as that of telecommunications”. After the group photo, the attendees enjoyed the Gala Dinner, which brought this year’s event to a close.