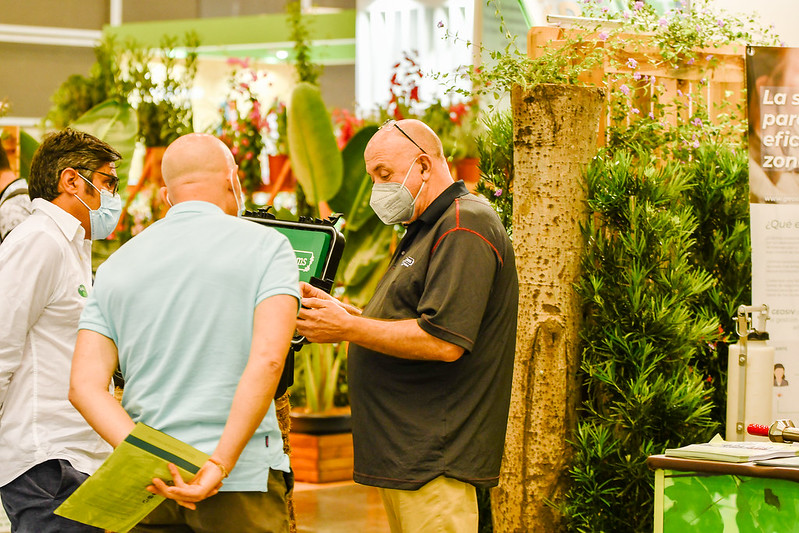 Iberflora and Ecofira confirm the resurgence of in-person trade fairs

Iberflora has exceeded pre-pandemic figures with greater international attendance. A total of 1,068 foreign professionals visited the event, 33% up on 2019. The total number of visitors increased by 38% to almost 10,149. A total of 400 brands, including 62 from abroad, presented their products during these three days at Feria Valencia. The event has become the first international event in the city of Valencia since the pandemic began.

Ecofira 2021 promotes the environmental sector and lays the foundations for next year’s event, from 4-6 October, together with Efiaqua and repeating the formula with Iberflora and Eurobrico.

Valencia, 7 October 2021 – Iberflora, the international trade fair for the plant, flower, landscaping, technology and home gardening sector regains its optimism and concludes its 50th event. The assessment has been more than satisfactory in what has been the first 100% in-person trade fair at Feria Valencia.

A total of 10,149 professionals from the green sector visited the event during the three days of the fair, 38% more than in 2019, pending the latest data from the afternoon. This year, moreover, Iberflora’s international character made a strong comeback, making it the first international event in the city of Valencia since the pandemic began.

In fact, the figures show that the number of foreign visitors increased by 33% compared to 2019. A total of 1,068 foreign professionals attended Iberflora from different parts of the world, including France, Portugal, Denmark and the Netherlands, although Asian, American and Russian buyers were also present. Major foreign buyers also attended, representing 510 companies.

In addition, some 400 brands were present at this 50th anniversary of Iberflora, including 62 domestic and international brands. In fact, 40 new exhibitors joined the fair, 19 of which were foreign.

These three days saw the whole exhibition centre bustling with business. The sector’s eagerness to meet in person again was noticeable and this was shown by exhibitors and visitors alike. “There was a real need to meet again and recover in-person business”, explains Maria José Sanz, from the major purchasing group Flora Holland.

“The fair was a reflection of the good period that the sector is going through”, reflects Iberflora President, Raúl Ferrer, who is grateful for all the efforts made by the organising committee for this year’s Iberflora. He adds that the international market has been very present because “It needed to be supplied for the coming years”.

For his part, the fair’s director, Miguel Bixquert, recalls that the green sector has had its best year in the last 20 years. “This was noticeable during the fair. In fact, the 2022 campaigns have been closed and many exhibitors already have reservations for 2023-2025”, he reveals.

Iberflora also held meetings this morning with important companies and associations from the sector that wanted to secure their participation for the next event, which will be held together with Eurobrico, Ecofira and Efiaqua on 4-6 October 2022.

The environmental solutions event, Ecofira, concludes today, with all the exhibitors satisfied, as they could finally hold this event for the first time since 2020. The results have been more than satisfactory and the basis is there for the event in 2022, along with its sister event for the water sector, Efiaqua.

During the three days of the event, exhibitors received a highly technical profile of visitors from the municipal and public administration sectors, as well as environmental technicians from companies looking for the latest innovations in the waste treatment and management sector and municipal services.

On its last day, Ecofira hosted the conference ‘Industrial Circular Economy, Key in the Fight against Climate Change’, organised by REDIT (Valencian Community Technological Institutes Network), which this morning brought together around a hundred specialists in environmental management. The conference was opened by the President of Ecofira, Jorge Tejedo, and the General Director of Environmental Quality and vice-president of the event, Joan Piquer, together with the General Director of REDIT, Gonzalo Belenguer.