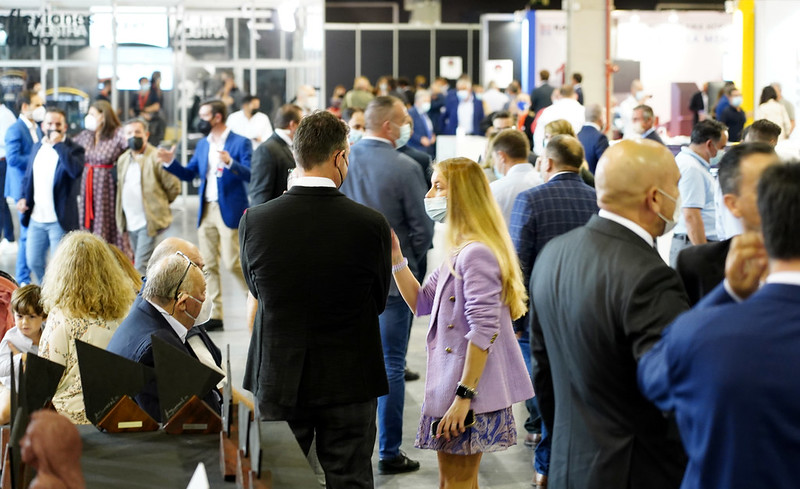 The International Funeral Products and Services Fair, which closes today at Feria Valencia, has had all the buying power and a great media impact thanks to the replica coffin from ‘Squid Game’.

Buyers and exhibitors said that it has been a long time since they had such a positive feeling at a fair, marked by quality visitors and the tendency to buy technological services.

Valencia, 22 October 2021 – Funermostra, the International Funeral Products and Services Fair, today concluded its 16th event. The event has been marked by the influx of quality visitors, both domestic and international, and by the great media impact it has had thanks to the display of a replica coffin that appears in the famous series ‘Squid Game’.

On a commercial level, the fair has been a success This is what exhibitors and visitors have affirmed, who have been able to do business in person again.

“It has been a long time since I had this feeling at a fair,” said Charo Baeza, co-founder of the Murcian company Vivo Recuerdo, which offers professional digital services for farewell rituals. “We have closed a lot of deals. In fact, at this event the sector has been much more open to buying technology,” added Baeza, who says that professionals in the sector have been particularly interested in buying her company’s latest innovation: ceremonies via streaming.

Ruud van Beurden, Director of Funeral Products, ended his last day at the fair highly satisfied with the results. “I have never sold products at a trade fair before. I made a lot of contacts and closed deals. But this year that has changed. I have sold [products] on the spot”, he admitted. He emphasised that the quality of the visitors has been noticeable. “The most important groups were at Funermostra, all the purchasing power of the sector“, he said.

For Amparo Méndez, co-founder of the company Eco invéntame, it was her first time at a trade fair. “We opted for Funermostra because it was the sector’s benchmark fair,” she said. Her innovative product, urns made entirely from food waste (coffee and orange waste) has been very well received by the sector, so much so that she says she will return to next year’s event. “Our product is circular economy and zero waste. We think it can bring a lot to the sector. In fact, we have sold to and created a portfolio of clients”, she explained. The exhibitors have shown their satisfaction with the fair and the hundreds of visitors have left with a very good feeling and eagerness to return next year. “Funermostra has proved to be the stage for change”, concluded Funermostra President, José Vicente Aparicio.